The Stressy Tree: Why Your Jesse Tree Should Be a Mess

{I don't know who needs to read this today, but I'm rerunning this one from a few years back because there's always someone stressing.}
~~~~~~~~~~
What is it with us Catholic moms and Jesse Trees? We are Paul in this scenario and the Jesse Tree is the thorn in our sides. Does canon law address this issue? Is there a commandment?

Thou shalt not neglect a Jesse Tree in thy house during Advent lest thy descendants die in utter ignorance of Scripture while clutching only a copy of How the Grinch Stole Christmas.

Although we've done a Jesse Tree for a while now — listen to me very carefully — it was a process. Here's the thing: Don't do what I did. Don't think the Jesse Tree has to be perfect, or perfectly executed every Advent, for it to do what it was meant to do.

The Jesse Tree activity has a cumulative effect. Do enough imperfect Jesse Trees over the years, and eventually your children will absorb some perfectly wonderful Scripture and knowledge of salvation history. (Or don't do one at all. There are lots of ways to learn things. But this post is for the mom who wants to do a Jesse Tree but simultaneously stresses about said tree.)

Here's our current Jesse Tree. My girls and I made the ornaments a long time ago out of salt dough. I use a small, artificial Christmas tree and arrange our Christmas books beneath the tree. 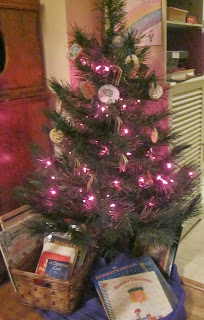 But this whole Pinterest-y approach didn't come together overnight.

When the girls were little, our Jesse Tree was a hit-and-run mess. But it's when they're little that you start stressing, right? ("They're little! I have to do it now! They'll never learn if I don't start when they're three!") Wrong. You can mess up a Jesse Tree for years, and they'll still eventually learn stuff. 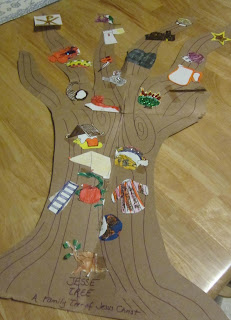 I was pregnant with Ramona. I was old and tired and I gave myself extra points merely for breaking out the glitter.

Another year it looked like this. (I think Ramona was a toddler? I was old, I was tired.) Kind of an ugly tree. We didn't even finish it that year: 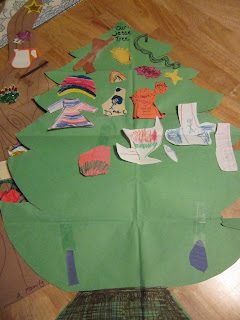 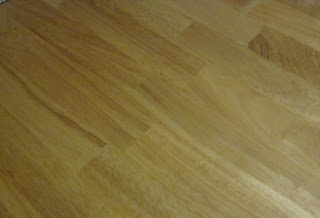 Yup. Nothin'. I searched in vain for the perfect tree branch to place in a pot as I tried to follow a friend's example. I tried so hard to be perfect that year that I frustrated myself completely and abandoned the entire activity. Anne-with-an-e was eleven before I finally decided to use the little artificial tree I posted above.

Still not perfect. I'd never made salt dough before and did it wrong, so the first set of ornaments cracked and broke. Then there were the times we had to make more ornaments because — who knew? — dogs love to eat salt dough.

And, what readings did we use? That took time to figure out, too. I couldn't find an easy, workable, all-in-one version of the Jesse Tree anywhere. (I think your odds here have gotten better. There are loads of resources out there now. Sheesh, I'm feeling like a pioneer or something.) If one source had ornaments I liked, it didn't offer neatly corresponding readings. If I found a set of readings I liked, suddenly my ornaments didn't match.

So after a few years of trial and error, I finally started using The Jesse Tree by Geraldine McCaughrean. Atticus read the stories in the evening, after dinner. Sometimes we missed a couple of days. Or a lot of days. Eventually, we'd catch up in the book, and add a few more ornaments to the tree.

The thing to remember about the Jesse Tree — the thing that will keep you from despising it — is that not only does it not have to be perfect, I don't think it should be perfect or perfectly executed. It should be like the human and divine history it's teaching: messy, full of skips, jumps, and mistakes, but with a gleaming, golden thread running through the whole thing, tying it together, proclaiming that God is there for us in the mess, always. Year in, year out.

So, don't do your Jesse Tree every day, on schedule, legalistically. Have a Miss Frizzle Jesse Tree: take chances! Make mistakes! Get messy!

The Scripture knowledge that a Jesse Tree teaches is cumulative; it's supposed to be. It's like doing the same kinds of math problems every September. It's review.

Over years and seasons of Advent, you'll discover that it doesn't matter which tree you chose, which ornaments you made or bought (or slapped with glitter) or which set of readings you used. It won't matter that some years you couldn't even face the thought of a Jesse Tree and you skipped it. What will matter is the irreplaceable, imperfect time you spent with your family.

And while you're at it, read the Grinch, too.

For more on all things Advent, go to the Monstrously Long Post.
Posted by Karen Edmisten at 7:47 AM

I was looking for a quick "clip art" of St. Lucy's bread, and I came across your beloved blog. I stopped blogging around 2013, I think, but I used to love coming to your blog in those days, and this post (actually, two posts! You are a star of the image search!) brought back so many lovely memories. I actually have a nice Jesse tree going this year! It's a cheap, rustic wooden tree frame, enhanced with tiny pix of the saints and special traditions we celebrate attached to the ornament (craft foam-backed paper) of the day. (The St. Lucy Bread image was to enhance our ornament for next Sunday, when we celebrate "St. Lucy's Breakfast". St. Lucy's day itself is just for planting wheat--to line the manger--in our house. It's a long story, and I don't have my own blog anymore, so...) Anyway, it was a delight to start my day here today. You come to mind more often than you might guess, and now you'll definitely be on my mind more often! It'll probably earn you a few Hail Marys, anyway! Thanks for being here. You're a treasure.

Eileen S. or Eileen on Him?? :D Thanks for your kind words!
Your Jesse Tree sounds so, so lovely. I love your tradition of planting wheat to line the manger — that's delightful. Thanks so much for taking the time to leave this beautiful comment. It made my day far more than you know.❤️

Have a happy, holy, beautiful Advent and Christmas, Eileen!