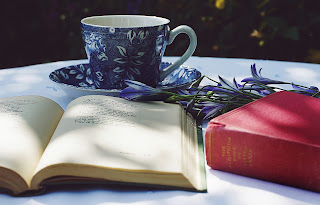 Three weeks ago, I shared Arthur Sze's "The Shapes of Leaves" and now, serendipitously, I see that Sze is the December guest editor for Poem-a-Day at Poets.org. Lovely!

Here's their interview with him about his curation process and his own poetry. In that interview, they asked what poem in the Poets.org collection he would send readers to:

Poets.org: ... If you could direct readers to one poem in our collection at Poets.org that you haven’t curated, what would it be and why?

Sze: I would direct readers to the poem “Prayer” by Jorie Graham. And it’s a short poem; it’s a marvelous poem that begins with observing a stream of minnows. And I love how it moves from the visible to the invisible world; how, in its syntax, it enacts a swaying and large, deep, generous vision of life. And she gets to say really large, fundamentally powerful things that are harnessed, that come by surprise through looking again at this stream of minnows. And I find it a marvelous poem, so I want to send readers to that.

Upon that recommendation, I offer you Jorie Graham's "Prayer." Some of my favorite lines from the poem are:
Nobody gets
what they want. Never again are you the same. The longing
is to be pure. What you get is to be changed.
Prayer
by Jorie Graham
Over a dock railing, I watch the minnows, thousands, swirl
themselves, each a minuscule muscle, but also, without the
way to create current, making of their unison (turning, re-
infolding,
entering and exiting their own unison in unison) making of themselves a
visual current, one that cannot freight or sway by
minutest fractions the water’s downdrafts and upswirls, the
dockside cycles of finally-arriving boat-wakes, there where
they hit deeper resistance, water that seems to burst into
itself (it has those layers) a real current though mostly
invisible sending into the visible (minnows) arrowing
motion that forces change—
(Read the rest here, at Poets.org.)
~~~~~~~~~~
Catherine Flynn has the Poetry Friday round-up today at Reading to the Core.
And don't forget to sign up, if you haven't already, for "Poem-a-Day."
(Photo credit: Suzy Hazelwood at Pexels.)
Posted by Karen Edmisten at 11:01 AM

I did read about Arthur Sze's new work, Karen, & I do receive the Poem a Day but don't remember this one, a solemn thought for our lives. Which line to choose, a tough decision, but I'll remember "What you get is to be changed." I liked reading what he said about it, too. Thank you!

I intentionally skipped past your favorite line so as not to bias my own reading. I copied/pasted the lines that struck me deeply, and then went back and saw that we were moved by the same lines, though I included "this is the force of faith". :)
Thank you!

I love this. Especially the idea that no matter what you want, "What you get is to be changed." Such big truth.

Linda, I had stopped receiving Poem-a-Day but I'm back at it. :) I think I unsubscribed during a time of Inbox Overload Syndrome but I promptly replaced it with other poetry offerings (so the Inbox is never fully streamlined, lol.)

Patricia, yes, I love that line, too! And the lines leading up to it.

Thanks, all, for stopping by!

Thank you for sharing this wonderful poem, Karen. I love poems that arrive at big truths like "this is the force of faith" through observation of something as unassuming as a stream of minnows.

Me too, Catherine! I'm so glad you liked this one.