Poetry Friday: In spite of it all, thanks

Every year, as a Christmas gift for my parents and my sister, I make a calendar. It's a winsome way to plop a year's worth of family photos in their laps, neatly laid out month by month, with context. As I worked on gathering photos this week, it was clear, of course, how quickly 2020 turned on us. I had already decided I'd be including screenshots from Marco Polo, and pictures of my parents, on our socially-distanced visits, through their sliding screen door. The calendar always doubles as a memory book; I knew that. But I wasn't quite prepared for how the sifting of photos would make me feel, how it would affect me as I considered all that we've lost.
January's photos included our New Year's celebration, a snapshot with my parents in their apartment at their retirement community, Ramona's first time to see a Broadway touring company perform Les Miserables. (She was also looking forward to Dear Evan Hansen in March, Anastasia in June...both were canceled, of course.) In February, apparently, I took very few pictures. Were we too busy? Were we already beginning to worry? It's hard to remember.
March's photos included teddy bears in the dining room window. 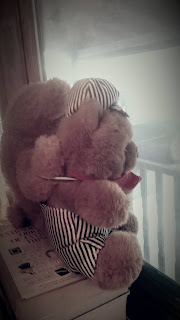 (Remember, "We're going on a bear hunt"? That's when it felt like we were all in this together, before some people decided masks were political or controlling, rather than a simple and sound way to be kind and protect one another. Sigh. Anyway....)
By April, pictures included things like this:

I somehow wasn't prepared for the tears that flowed as I worked on this annual, usually-fun calendar gift. So I let myself have a cry, and then I got back to work, looking for all the things we can be grateful for. I know how "Pollyanna"-ish such things sound, but W.S. Merwin puts it in perspective for us. It's not blind or naive to acknowledge our human nature and know that we can, we must, say thanks, even in the face of — perhaps especially in the face of — mysteries and sadness that we don't understand. Not only can we and must we ... we can't seem to help it.
And for the record, Pollyanna gets a bit of a bad rap. Her "Glad Game" was a survival mechanism, a coping technique, and the thing that transformed her own life and the lives of others. I think W.S. Merwin would tell her thanks.
Thanks
by W. S. Merwin
Listen
with the night falling we are saying thank you
we are stopping on the bridges to bow from the railings
we are running out of the glass rooms
with our mouths full of food to look at the sky
and say thank you
we are standing by the water thanking it
standing by the windows looking out
in our directions
back from a series of hospitals back from a mugging
after funerals we are saying thank you
after the news of the dead
whether or not we knew them we are saying thank you
....
(Read the rest here, at Poets.org.)
~~~~~~~~~~
Lovely Linda at TeacherDance has the round-up this week.
Posted by Karen Edmisten at 10:04 AM

You making your calendar reminds me of me thinking about writing our holiday letter this year. I hope I can do it as well as you did. I just want to say "ugh" and leave it at that. (I also have done a calendar, but it is just animals and the whole family took the photos, so it's not very emotional.) Good pick for a poem...nice ending. xo

Yes, 2020 (ugh) -- sorry to hear about Atticus! I can imagine what a strange, emotional experience making the calendar was this year. No matter the trial, pain, confusion, or struggle, there is something within us that can summon gratitude. That says a lot about the resiliency of the human spirit, doesn't it? Thanks for the poem, and have a Happy Thanksgiving!

Hope your husband is getting better! Thank you for sharing this Merwin poem and a reminder to be and stay grateful no matter what.

Merwin, prescient, or is it something we might always be aware of, no matter the year, some need "we are saying thank you and waving/dark though it is." I make a calendar every year or so for my brother, but this time I haven't visited so cannot place my favorite pics of our time together, so will not make it. I've been wondering what to put on a Christmas card, have not yet looked through the months, but I understand your crying, Karen. I'm grateful for your empathy and finding/sharing this poem! Best wishes to all for a good holiday and for Atticus healing fast.

Oh, I love this Merwin poem...such a good poem to hold onto when you need something to hold. I'm glad you could have a good cry. Holding on to all this waiting for things to get better adds up. What feels like no time passing is actually very heavy. Thank you for your thoughts with this poem.

Karen, I always loved the movie Pollyanna and even have a vintage book that I am saving for my granddaughter when she is in elementary school in the future. There are many ways to say thanks and Merwin starts off the poem with positivity.

Merwin's poem captures so much, as does your calendar creation project, Karen. Thank you for the reminder: "know that we can, we must, say thanks", even for 2020. :)

Karen: So much to say about this post... but, yes... we must say thanks. Every day. I have joined in the crying this season, as I would guess have most. But you and I have stories in common. And thanks.

Tabatha, I completely understand just wanting to say ugh, and Jama, I agree — "resiliency" is a word that's come up among us quite a bit this year.

Linda B., maybe all poets are prescient? :)

Linda M., you said, "What feels like no time passing is actually very heavy." Yes! Time feels so strange this year. My daughter and I talked about that the other day. Every month has gone quickly and slowly.

Carol, what a special and treasured gift that book will be!


Bridget, thanks for the solidarity, and Karen, you too!

Love to all of you, and thanks -- yes, Atticus is doing much better. He recently ran 13 miles (he didn't go to the actual half-marathon he always looks forward to, but he ran the distance.) He still has to be careful, but he's come an incredibly long way from those days in April when he couldn't stand up straight without pain. We're so grateful for that.

This poem so speaks to me. I've really only read bits of Merwin. I'm going to go look for a complete book now. This poem made me feel such a sense of peace. Thank you, Karen xox

I still remember reading the actual Pollyanna book for the first time and being (Pleasantly!!) startled by how good it was, and not at all saccharine, as her reputation (i.e. ‘rose colored glasses’ being mocked) would suggest ... I do hope Atticus's back healed well??! .... I used to create a family photo calendar every year from my photos! sigh, a habit that fell away, over time ...

Laura, I'm so glad it brought you peace. We could all use some peace right now. :) xo

Penelope, I first realized there was more to Pollyanna than the stereotype when I saw a beautifully done production on PBS. And yes, thanks, Atticus is doing so much better. He still has to be careful, and do regular/specific stretches, but he's gotten back to running his half-marathon distances, which pleases him to no end. :)