From the "How My Lent is Going" Files: We Got Kicked Out of a Chinese Restaurant 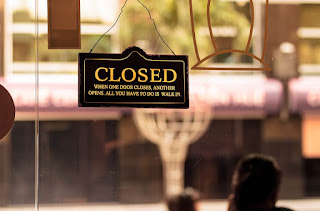 Every year, you bring it. Something unexpected. I've written to you before, talked to you about how you predictably surprise me with the unpredictable. You're always good for me. I just can't always figure out, in the moment, just how you're going to be good for me. I've come to expect all this.

I generally do not, however, expect to be told to leave a restaurant. Not even during Lent.

On Saturday, while Atticus was enduring a long, exhausting day at a speech tournament, my girls and I decided to go to 5:30 Mass, and then out for Chinese food. I was thrilled to be feeling well enough to go out for Chinese food, because earlier in the day, I'd had some stomach upset. But now I felt good! The plans were on! We were celebrating a couple of things, and some health milestones (ironically, given the stomach upset). We all needed a night out, and were looking forward to lingering over a delicious meal together.

As we left Mass, we confessed to one another that our minds had wandered during the homily. Hunger repeatedly led me to stray ... thoughts of crab rangoon were more compelling than Father's thoughts on covenant; I was preoccupied with shrimp. When we got to the restaurant, we saw a sign on the door:


We are understaffed tonight. Accepting take-out orders, but service in the dining room will be slow. Sorry for the inconvenience.

We walked into the restaurant, and saw that just a couple of tables were occupied.

Suddenly a blur that I quickly identified as a waiter stopped short, locked eyes with me and barked, "No more diners! No one else in the dining room!"

For a split second, I thought he was joking. He's going to break into a smile, said my hunger-addled brain, and say, "Just kidding! It'll be slow, but have a seat!" Then he would beam at us, the way that one-favorite-waiter-of-ours-at-this-restaurant used to do when my girls were little and ordered wonton soup. (Whatever happened to that guy? He never barked at us.)

But, ummmn, no. He didn't. There was no smile on the horizon, not for a million miles. I took a closer look at his harried self, his eyes boring into me, and despite all evidence that he was completely serious, I said, "Seriously?"

And with that, he marched off and disappeared into the kitchen.

Dazed, the girls and I looked at each other. "Do we ... want take-out?" ventured one of them. (I don't remember which one of them said it; I was in shock. Maybe I said it. Trauma messes with  memory.)

"Not after that," I replied. "Let's go somewhere else."

Dejected, and keenly feeling the loss of rangoon, we trudged out of the restaurant. Still processing, we asked one another where we wanted to go. We wanly discussed options, drove to another place. We didn't even park -- the crowd was spilling out the front door, and we were getting really hungry. We drove to another restaurant (one that's famous for being slow at the best of times) and saw another crowd. Now we were hangry. Someone suggested we just grab take-out Chinese from the grocery store. Yes! I agreed to this because, as I told the girls, "At least we know we can walk in, tell them what we want, and walk out with it in two minutes."

But -- for the first time ever -- we had to wait. For grocery store Chinese food.

"Ho-kay," sighed the kid behind the counter, "lemme go tell him we need more lo mein."

"Thank you," I said, trying for a tone that was somewhere between I know your job sucks on a Saturday night, kid and But they do, after all, pay you to do this.

"And, um, we want six egg rolls," I added, tapping the glass. "Do you have more egg rolls?" I looked worriedly at the three lonely egg rolls in the warming tray.

He heaved a deep sigh (clearly he was in existential pain) and looked over his shoulder in the general direction of the Keeper of the Egg Rolls. He looked back at me.

Do you really have to have egg rolls tonight? his eyes said. "I'll go see," his mouth said.

Eventually, after about 367 minutes (or maybe only six), we got the egg rolls, the lo mein, the rangoon, the spicy chicken. We left.

We went home and found Atticus. On his way home from the speech meet, he had stopped at our third-choice, basically fast-food restaurant, waited 30 minutes for his order, and wolfed it down before we arrived. We recounted our equally sad tale of woe but by this time, of course we all couldn't help laughing at the absurdity of it all.

Lent, dear, what are you teaching me this year?

Does it have something to do with instant gratification? With patience? With my Chinese food obsession?

Or was this just about flu, and restaurant employees dropping like flies, and Saturday night crowds, which are present no matter what liturgical season I'm trying to dissect?

I don't know yet. I'm in a bit of existential pain over it all, dear Lent, so you'd better make yourself a little more clear.

Yours in patient waiting,

Karen
Posted by Karen Edmisten at 9:33 AM