"Hey, there's pepper all over my notebook!" (Or, Schoolish and Unschoolish Things) 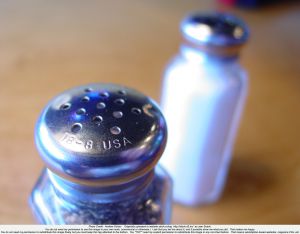 Anne-with-an-e was studying for a zoology test.

Ramona had been on my laptop, watching a science video. I can't remember what Betsy was doing (I'm sorry, Middle Child! I feel your Middle Child pain!)

Ramona had been performing her scientific inquiry, that of sorting salt and pepper with a static-charged balloon, at the kitchen table, which was also Anne's workspace of choice. So, naturally, a bit of overlap occurred between animal and mineral.

Then, Ramona decided that her experiment might one day be the basis of a homeschool pick-up line. She did her best imitation of a suave homeschool guy purring, "Hey, there ... I can separate salt and pepper."

I made a note to myself to ask the girls more about this.

It's possible that while the separation of salt and pepper was occurring, Betsy was reading Brain Rules, which is a pretty fun and fascinating little book. Or she could have been playing Dragon Box, which my kids surprisingly love. I say "surprisingly" because it's an app based on algebra and my daughters swear on a stack of slide rules that they hate math. Or she may have been furthering her love of all things Jane Austen by rereading Pride and Prejudice for the -- how many times is it now? Do I need a slide rule to figure this out?

And now I'm back to the homeschool pick-up line. Any guy with half a brain, trying to impress a homeschooled girl, need only say something like this: "If I can ever be even a tenth of the romantic that Fitzwilliam Darcy turned out to be, I'll die a happy man."

Don't fall for it, girls.

And that's a recent day in the life.
Posted by Karen Edmisten at 7:46 AM

Love it, love it. Especially the Fitzwilliam Darcy line. Although the line in the link, "I've lost my Rosary. Could I use your fingers?" is right up there, too. And just imagining your young one doing the salt and pepper line. Thanks for a wonderful few laughs this morning

I want to come play at your house.

July
2 Laura at Laura Shovan
9 Margaret at Reflections on the Teche
16 Molly at Nix the Comfort Zone
23 Kat at Kathryn Apel
30 Becky at Sloth Reads
August
6 Mary Lee at A(nother) Year of Reading
13 Christie at Wondering and Wandering
20 Carol at The Apples in My Orchard
27 Elisabeth at Unexpected Intersections
September
3 Heidi at my juicy little universe
10 Tricia at The Miss Rumphius Effect
17 Denise at Dare to Care
24 Laura at Laura Purdie Salas
October
1 Catherine at Reading to the Core
8 Irene at Live Your Poem
15 Bridget at wee words for wee ones
22 Jama at Jama's Alphabet Soup
29 Linda at TeacherDance
November
5 Tabatha at The Opposite of Indifference
12 Matt at Radio, Rhythm & Rhyme
19 Carol at Beyond LiteracyLink
26 Ruth at there is no such thing as a God-forsaken town
December
3 Michelle at Michelle Kogan
10 Cathy at Merely Day by Day
17 Jone at Jone Rush MacCulloch
24 Buffy at Buffy Silverman
31 Carol at Carol's Corner