I had a schoolgirl crush on Thomas McGrath when he visited my college back in, well, ahem, a few years back. That pensive, craggy face ... the lush, grave language.

After you read this poem, you might have a schoolgirl crush on him, too. I dare you not to.

Before you, I was living on an island
And all around the seas of that lonely coast
Cast up their imitation jewels, cast
Their fables and enigmas, questioning, sly.
I never solved them, or ever even heard,
Being perfect in innocence: unconscious of self;
Such ignorance of history was all my wealth—
A geographer sleeping in the shadow of virgins.

But though my maps were made of private countries
I was a foreigner in all of them after you had come,
For when you spoke, it was with a human tongue
And never understood by my land-locked gentry.
Then did the sun shake down a million bells
....

This is the love that now invents my fear
Which nuzzles me like a puppy each violent day.
It is poor comfort that the mind comes, saying:
What is one slim girl to the peoples’ wars?
Still, my dice are loaded: having had such luck,
Having your love, my life would still be whole
Though I should die tomorrow. I have lived it all.
—And love is never love, that cannot give love up

Read the entire thing here, at The Poetry Foundation.

The round up today is at Carol's Corner. 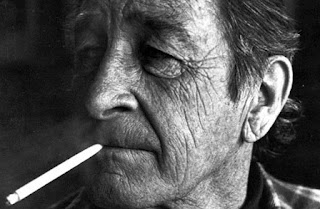 Karen, would you like to host a PF round up in the next couple of months? If so, sign up is here:

Wow, I just now made it over to the scheduling page, and you are full through December! That's great!

My first time visiting your blog, and aren't I lucky to read this poet, who'd I'd not heard of before.