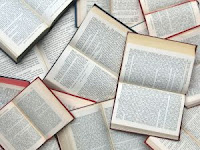 Got this one from Jennifer, Faith and Alicia:

1. What author do you own the most books by? C.S. Lewis, William Faulkner, Shakespeare, and Dr. Seuss. (Now there's a group I'd like to put together in a room -- what would they create? A sing-songy, nonsensical, incomprehensible, lyrical, heart-probing and classical defense of Christianity....)

2. What book do you own the most copies of? I think it's the Bible. Or Shakespeare. Or a Harry Potter book (I blame the children for that one.)

3. Did it bother you that both those questions ended with prepositions? It is something of which I had not thought.

4. What fictional character are you secretly in love with? It's no secret that I adore Atticus Finch and hope to spend the rest of my life with him.

5. What book have you read the most times in your life? Actually, it's probably a little paperback called My Name is Elmo.

6. Favorite book as a ten year old? Nothing startlingly classic -- I didn't even read some of the most wonderful stuff until I was an adult, such as Anne of Green Gables. No, my favorite was something from the Daytona Beach, Florida library. We lived by the ocean for a year when I was ten, while my father was stationed in Korea, and I read and reread a book about a woman who had twenty or thirty cats, one of them named Felicity. I vowed I would one day name a child (or a cat) of mine Felicity.

7. What is the worst book you’ve read in the past year? The worst half of a book I read was Twilight. I do not care for the "alluring bad boy" theme with which it drips.

8. What is the best book you’ve read in the past year? Ginger Pye with the kids. For me: Malcolm Gladwell's Blink and his Outliers, and Charles Shields' Mockingbird: A Portrait of Harper Lee. And my reread of To Kill a Mockingbird. So fun to share it with Anne.

9. If you could force everyone you know to read one book, what would it be? To Kill a Mockingbird. But they can't have Atticus. He's mine.

10. What book would you most like to see made into a movie? They already did it. To Kill a Mockingbird is probably the closest thing I've seen to a beautiful translation to screen.

11. What is the most difficult book you’ve ever read? I'm sure it was something by William Faulkner, and I blame him. And alcohol. His, not mine.

12. What is your favorite book? I can never choose just one! Don't torture me with sadistic mind games! (And that is a stolen quote from, not a book, but an episode of a Bob Newhart show.)

Doesn't "my favorite book" depend on one's mood? One's season in life? The season of the year? I love different books in different moments. Don't you? Who created this meme, anyway? Is this a psychological test?

Now, I'm not saying that love depends on a mood (don't get me started) but to choose a favorite book is akin to choosing a favorite child. And, I'm not saying that I have different favorite children on different days, depending on my mood. Anne, Betsy, Ramona, you know that, correct? I would hate to have a little blog meme inflict some deep and lasting psychological damage on my children. But, I digress.

Loads of favorite books that everyone should read at some time or another:

To Kill a Mockingbird, The Great Gatsby, Fr. Elijah, The Fire Within, Mere Christianity, The Secret Garden, Anne of Green Gables, The Lion, the Witch and the Wardrobe, Abandonment to Divine Providence, My Antonia, all the Martha and Charlotte books, everything about Beezus and Ramona, Little Women, Brave New World, The Best Christmas Pageant Ever, Miss Rumphius, Dandelion Wine.

And that's just one mood.

13. What is your favorite play? The first play I ever fell in love with (via reading) was Romeo and Juliet, so of course it still holds a place of privilege. And sniffles.

14. Poem? Too many to name. See all those Poetry Friday posts.

15. Essay? Every one that C.S. Lewis wrote, and Annie Dillard's "God in the Doorway" (which I would probably never have found if not for my friend, Jack.)

16. Who is the most overrated writer alive today? I'm gonna have to say Stephanie Meyer. I just don't get it. Well, I do get it, but I don't care for it.

17. What is your desert island book? In this book meme from awhile back, I said I wanted something with practical tips and hut organizing strategies.

18. And . . . what are you reading right now? I just finished the reread of Fr. Elijah (which falls for me under "spiritual reading" much more strongly than under "fiction" ... such a beautiful book) that I began on Mother's Day; I'm reading Fruitless Fall, by Rowan Jacobsen, and The Tipping Point by Malcolm Gladwell. Also, Mother Teresa's Secret Fire, by Jospeh Langford. And, I'm reading The Silver Chair aloud to the kids.
Posted by Karen Edmisten at 7:05 AM

Oooh, I would love to discuss My Antonia with you. I just didn't enjoy it at all. High five on Stephanie Meyer. :)

"Now there's a group I'd like to put together in a room -- what would they create? A sing-songy, nonsensical, incomprehensible, lyrical, heart-probing and classical defense of Christianity...."

I want to be a mouse in the corner of that room.

I think I have more C.S. Lewis books than anybody else. Coming up a close second would be G.K. Chesterton. Not very hard to guess the rest of my literary favourites, would it?

I mean to say, I have more books by Lewis on my shelf, than any other author, not that I have more C.S. Lewis books than anybody else, but come to think of it, I wish I had more than everybody else had.

You can quote the Bob Newhart Show? Wow, you just really dated yourself there, Karen!LOL!

Jenn, did you see that at Lapaz they're anti-Twilight, too? :) We'll talk 'Tonia.

Melanie, I'd love to be that mouse, too, and Warren, I'd take more Lewis books than anyone else, as well. :)

And, Theresa, I date myself on a daily basis!

Almost all of the above -- and I bet I have more CSL than you, Warren!

And let us straighten our ties (for as Jeeves says, there is never a time in which ties do not matter) in honor (or honour) of P.G. Wodehouse.

finally someone who didn't enjoy Twilight. :)