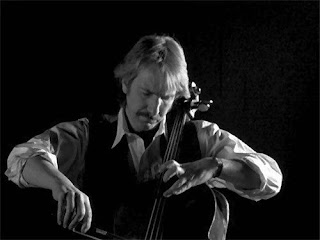 This is the image that should have been chosen for Truly, Madly, Deeply instead of the silliness that was inexplicably used on the video and dvd covers.

Ana, in the comments on my earlier post, asked for more information, saying that she was highly skeptical of this film and its maker, as she was decidedly not a fan of The English Patient (which I never had much desire to see and so can't really comment about.) I've not seen Anthony Minghella's "bigger" movies and initially, I didn't even realize that this one was done by the same director.

The premise of this film has no doubt kept many potential viewers away (not to mention the bad video cover art, which seems to want us thinking this movie will be full of zany fun. Uh-uh.)

The premise: Nina (Juliet Stevenson) has lost her beloved, Jamie (Alan Rickman) and she's slowly been swallowed up by her grief. But then, one day, Jamie comes back. From the dead.

"Oh, n-o-o-o," Atticus moaned, "It's like that Patrick Swayze movie!" and he immediately lost interest (and who could blame him? And how many others have thought the same thing? I now blame Patrick Swayze for the fact that I did not get to experience Truly, Madly, Deeply much, much earlier in life.)

And, just in case you're wondering, yes, Atticus did watch it with me last night (I first watched it the night before, when he was out of town) and yes, he liked it. Very much. Not quite the head-over-heels reaction I had, but ultimately he was charmed. I can always tell he's enjoying a movie if he actually pauses it when he has to leave the room. If he casually mumbles, "No, that's okay, leave it running," I know I've got a thumbs-down on my hands.

Truly, Madly, Deeply was Minghella's very first film, and the story behind it (included on the dvd's special features) is interesting. He says it grew out of "an act of cowardice" -- he accepted the job of making this movie for the BBC as a way of experimenting with directing on a small scale, with a project he thought no one would really see should he happen to fail miserably. It was shot in 28 days, mostly on first takes.

What is it about this movie that made me fall in love with it?

Just about everything, actually.

I'll admit to being a pushover for a movie that uses Bach and a cello so beautifully. Clearly, it had me with the opening scenes.

But, there's also Juliet Stevenson's acting, which is exquisite. There's the pointed look at grief and loss, and the genuine, searing pain of it all. There's wit and a sense of humor and unexpected lines that make you laugh out loud with their sharp revelation of character. And, there is the utterly affecting portrayal of a very real love between a man and a woman, complete with in-jokes and goofiness.

I was going to try to write the definitive review of this new favorite, but then while Googling, I stumbled on this review, at a site I'm sure I would otherwise never have found. It's a near-perfect look at the movie, and I realized there was no point in my efforts at capturing my reactions. This woman has said just about everything I would have said (I have only minor quibbles) -- almost every favorite line of mine, every brilliant touch -- I might just love this review as much as I love Truly, Madly, Deeply. Thank you, whoever you are. (But, reader beware: lots of plot spoilers in this thorough look at the film.)

I'll leave you with the following glorious, ironic scene. I love Nina's giddy joy here as she revels in Jamie, who has just returned. And, as the above referenced reviewer has noted, it's going to take at least a week to get this song out of my head. Even Ramona is singing it.

6/23/07: edited to add this link, for the above referenced review. For some reason, the site I linked to seems to have disappeared from the face of cyberspace. People, people ... please feel free to tell me that I have a faulty link ....
Posted by Karen Edmisten at 5:30 PM

Labels: movies
Email ThisBlogThis!Share to TwitterShare to FacebookShare to Pinterest