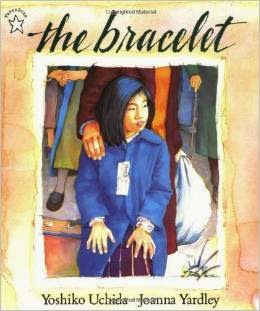 by Yoshiko Uchida, and illustrated by Joanna Yardley, is a simple but affecting book about one little girl's reaction to an internment camp. Before she and her family are taken away, seven-year-old Emi is visited by her best friend, who gives her a bracelet as a memento of their friendship. The fate of the bracelet is tied to Emi's understanding of what she can and cannot hold on to for the duration of the war. A good introductory picture book on the subject of Japanese-American internment camps and their effects on those who were imprisoned. 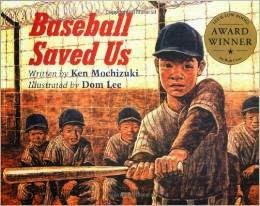 by Ken Mochizuki, illustrated by Dom Lee, is also good as an introduction to the issue of internment camps. The focus is on one boy's experience of playing baseball while imprisoned, what that does for him later, and how he is motivated and strengthened. The kids cheered at the end of this simple and uplifting book. 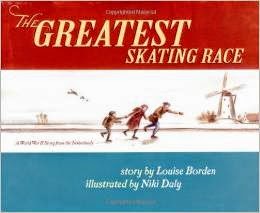 We headed back to the Netherlands for The Greatest Skating Race

by Louise Borden (illustrated by Niki Daly) and I think the kids were relieved to leave the oppressiveness of the internment camp books behind (except Anne, who was reading Farewell to Manzanar

on her own.) This book was delightful, and reminded us of our favorite van Stockum books, as well as of the resourceful kids in Snow Treasure. Ten-year-old Piet must help two young friends skate to freedom in Belgium. In the process, he realizes that an enormous personal dream is within his grasp. A great read. 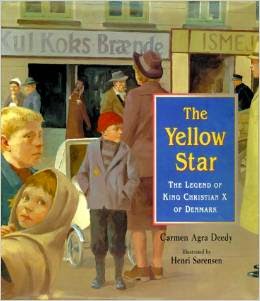 The Yellow Star, The Legend of King Christian X

by Carmen Agra Deedy and Henri Sorensen, is another uplifting, and gorgeously illustrated book. This one has received several negative reviews, because it is not an historically accurate work. In reality, King Christian of Denmark did not don a yellow star and encourage all of his subjects to do so, as he does in this book. I disagree, however, with the objections to the book on this account, as the author makes it clear that this is a legend. As such, it was fuel for a great discussion about what legends are and why they spring up. Anne and Betsy were reminded of Lois Lowry's Number the Stars, which depicts King Christian as a greatly loved and respected leader. The Legend of King Christian X left the girls with what I think the author intended: the question, "What if?" What if a leader were really willing to do such a thing? What if I were willing? Am I?
Posted by Karen Edmisten at 6:36 AM

Karen, how do your daughters deal with the very serious and tragic stories that are associated with World War II? As you are aware, I dread having to cover these topics with my daughter.

Jennifer, that's a great question, and you've prompted a new and separate post that I hope to write later today.

For now, I'll just quickly say that we started slowly into the issues of WWII, and their ability to deal with it has been a developing thing over this school year. Also, they've not yet been exposed to realistic photos of the concentration camps, and reading aloud often allows for selective editing. Those things have helped, but it's definitely an area in which I would follow your child's lead regarding how sensitive she is. I would *not* have done this unit with my oldest when she was only 10, but my current 10 yo handles things differently, and I felt it was okay to move ahead as we have.

Karen, we own or have read all of these books (except the baseball one)--and have enjoyed them too! I would add to the collection the Dunkirk Ships also by Borden, and Snow Treasure (chapter book). Jennifer, i think the answer to your question relies precisely on books such as these. I have found them to be a very useful way to introduce the children to the seriousness of the war issues without overwhelming them: the injustice of the obligatory use of the yellow star, the effort people in the USA did to help Europeans, the fear children felt during the war years in Holland... . Children can handle these bits and form a good idea in their hearts of what the war meant before they ever hit WWII in textbooks and learn the magnitude of the holocaust, or D-Day, or Hiroshima-Nagasaki. Thanks, Karen!

Ana, The Dunkirk Ships by Borden is on my wish list! And, we did read Snow Treasure and loved it. I just finished a long post as a response to Jennifer and basically rambled on for a long time, saying what you said so succinctly here. :-) Perfect. Thank you.