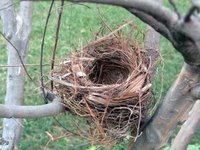 Last night, I was thinking about my girls, and about how fiercely and deeply I love them. I thought about what an imperfect mother I am, but of how forgiving they are of that. I thought of how the last thirteen years have raced past us, so full and so rich. And I thought of the times I have squandered "this moment" ... and then I thought of this post from last year.

So, I'm sharing it with you now.

I got to thinking about something last night, just after I settled a dispute between Anne-with-an-e and Betsy (or was it between Betsy and Ramona? Or had Ramona been annoying Anne? Ahem. You get the picture.) I was tired, and when one is tired, even the littlest irritations loom large. A few tiny disagreements suddenly feel like near-constant bickering, picking-on, finger-pointing and tattling. Oh, my, the behavior of children. I mean, it's so ... immature.

I felt a little overwhelmed (did I mention I was tired? So much depends on a good night's sleep ....) Yes, I thought, this is the stage of life at which I'm currently parked:

My children are walking, talking, reasoning (mostly), sharp little tacks who constantly delight me but are also capable of draining my mental energy. They're all quite verbose (wonderfully, exquisitely so on the good days and "Do-you-ever-stop-talking?!" on the bad) and that's what can get me. It's not a physical exhaustion, but it can feel so. It's mental fatigue: the dragging of a mind forced to think of 17 different ways to say, "Be kinder," the sluggish tongue that must -- one more time -- wrap itself around the words, "Go tell your sister you're sorry. And please don't ever do that to her again when she's in the shower." It's the ambushed brain that can't take one more joke that involves body parts or functions.

This is where we are, I thought. But when they're older ....

"Uh-oh, stop right there, missy," I told myself. "Don't start playing, 'When they're older,' because it's a lose-lose proposition."

"When they're older" is the trap that entices you to long for a different stage of life. I've sometimes fallen into it, but it's not a good place to live. Because, you see, if I live my entire life in the "When They're Older" trap, before I know it, they'll be older. And they'll be gone.

It goes something like this, looking back to infancy:

When she's older, she won't wake me up every night.

(But she also won't coo and gurgle in that delicious way. She won't linger at nursing and enclose me in her eyes, telling me I'm her reason for being.)

When she's older, I won't need to carry her everywhere and then my back won't ache all the time.

(She also won't be portable enough to be cuddled, held and snuggled no matter where we are or what we're doing. She won't fit neatly into one arm and I won't be able to scoop her up to celebrate that she just mastered skipping.)

(She also won't have that same awed look on her face that she got when she saw her first penguin at the zoo. She won't study caterpillars and ants for extended periods and she won't be delighted by pointing out water towers, having just learned what they are. She won't have that squeaky voice that personifies "ironic" when she says "Awwwww, look at that babeeee! He's so cuuuuute!")

When she's older, I won't have to listen to body function humor.

(Well, I can just keep hoping on this one.)

When she's older, she won't pick on her sister. She'll be too mature for that.

(And she'll be too mature to sit on my lap, play hide-n-seek, wear her hair in ponytails, jump rope, get that incredible shine in her eyes when she kicks a soccer ball and she'll no longer be more delighted by my company than anyone else's in the world. She'll have discovered there are other things and other people who are important to her.)

When she's older, she won't be so moody.

I've always found "When They're Older" to be counter-productive. Oh, sure, it might seem to comfort me at the time (and don't get me wrong, there's a place for the "This too shall pass" philosophy) but most of the time, "When They're Older" is the opposite of comforting -- it's agitating. It forces us to live in and for the future. And when we do that, we miss so much of today. This Moment.

Rather, I must embrace that my children are just that. Children. They're going to be childish. And my sometimes-ambushed brain has to shore up to take one more joke, one more poor choice, one more tattle. I have to remind myself that bad days make it feel as if this happens all the time, but I know that it doesn't. Because on the same day there's been tattling, a poor choice and a joke that only a daddy can appreciate, there have also been cuddles and hugs and beaming looks of love. There have been discussions that run deeper than I thought a ten-year-old could handle and insights so moving that I've gotten a glimpse at the woman my daughter will become. There have been tea parties and read-alouds, girl-talk and cookies in the oven.

There has been the delight of "I'm so glad they're this age. I'm so glad for now. I'm so blessed by today. I'm so in love with this moment."

Today, I won't fall into the "When They're Older" trap. When they're older, they'll certainly be more mature.

But they won't be here.

And I'll miss them. So very, very much.

Posted by Karen Edmisten at 5:59 AM

How true, Karen, thanks for re-posting this one. I always think, "When they are grown we will have the house in perfect order all the time. Nothing will be broken and I will have it decorated just as I have always wanted it. But I will be sitting in this perfect house bored out-of-my-mind."

You made me cry! Really Karen, it always feels like you are writing just to me, so poignant are your words. I've been playing this game with my two year old all week. Thank you for putting a new light on this.

Karen, I wish you knew how perfect this was and how much I need to hear this some days - like today. And the empty nest. . . I am trying not to get misty because I have to go upstairs now and pretend I was "just checking my e-mail" and not contemplating one of the most important, wonderful, bittersweet truths of motherhood. You know that feeling you get when you try not to cry and your heart it all hot and tight in a good way? Thanks. I needed that.

Oh, Karen, this is just beautiful--and so very perfect in every single way. I am so right there with you on not wanting to rush this precious time. You have expressed this so perfectly--and that empty nest image is a killer! The moment I saw it, I braced myself for an emotional read.

You are a great, great writer, Karen!

Karen, this is a beautiful post. My Gianna recently asked to try on my wedding veil. I let her. It brought me to tears, but boy did it get me to love the present! May we all live for today as you have so beautifully described.

This post is perfect in every way. Truly we only get this precious moment once. I love their innocence, their joy and utter content. I'll be re-reading this post to remind myself again and again how special this time is.

Karen, what a wonderful post:) Our twins came 10 years after our youngest and 19 years after our oldest and if I've learned nothing else I know to embrace and enjoy where they are "now" because it's all too fleeting. Bless you.

This is so beautiful, Karen.

Very beautiful, Karen, and so true; but sadly and happily our family is getting very close to the "when they're gone" time - as our oldest graduates from high school in less than 4 months - I hope and pray I have done my very best!

Beautiful, Karen. I cannot think of the time when my children will be grown and gone without crying!

This post was like an arrow to my soul. I am so guilty of this, even though I know the danger of playing the 'when their older game'. I am getting better, but appreciating the present gifts is a not a habit I have mastered. Posts like this one keep me inspired!

You all have absolutely made my day. Thank you for sharing in this reflection with me, and thank you, so much, for taking the time to stop and tell me your thoughts. *I* needed *that.*

What a beautiful and edifying thing is this sisterhood of motherhood.