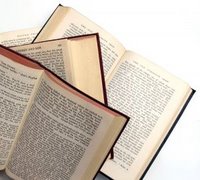 Charlotte Mason wrote extensively of connections and of the ways in which reading "living books" can help children to make vital connections between themselves and the world in which they live. Recently, we had a nice series of connections occur, related to our read-alouds (this is one of the reasons I consider our read-alouds to be at the core of our home education.)

When we read Caddie Woodlawn, we discussed the scene in which the settlers were banding together at the Woodlawn home, preparing for an attack by the Indians. The purported attack was based solely on rumor, but even so, a couple of the settlers began to plan an offensive attack, rather than to merely defend if that became necessary.

"Why would that be wrong?" I asked the girls. They weren't entirely sure, so we talked about it. I gave a small example:

"Let's say that there's a boy in our neighborhood who looks kind of tough. You've heard that he's a bully. You've heard that he's beaten other kids up, but you've never actually seen it happen, you've just heard the rumors. What if one day you said to yourself, 'I'm not going to wait for him to hit me ... I'm going to hit him first and get it over with.' What would you think of that?"

They were horrified. "We wouldn't hit someone for no good reason!"

Ah, good. We were getting somewhere. Back to Caddie's neighbors. Had the Indians actually done anything wrong? Had they attacked the settlers? No .... If they did, would the settlers have been justified in fighting back to defend themselves? Yes .... But, if they (the settlers) have not been attacked, should they strike first, just to get rid of their perceived problem? No, the girls agreed, that would be wrong, just as it would be wrong to hit the boy rumored to be a bully.

From there, we moved into Church teaching. I briefly explained that the Catholic Church has very specific teachings on what is considered a just war, and that it is very rarely considered moral to strike first, but that defending oneself can be another issue altogether.

This sounds as if it were all very dry and didactic but the conversation really took only a minute or two and was a marvelous way of connecting the literature we were reading (Caddie) to real life (the bully) to our faith (teachings on violence, aggression and self-defense.)

And from there, the connections continue. As we started Little House by Boston Bay a few days ago, we came to a scene in which one of the boys is excited over who might be "whupping" whom, and suddenly Betsy's eyes got that look (the look that tells me connections are clicking into place in that adorable little brain of hers.)

"No ... wait," she said. (Click, click ... ) "It's not right to strike just to strike. You have to wait and see if there's a good reason. And if there is, then you can fight back, but you can't just start a fight or a war just because you want to."

Aren't connections fun? Oh, how I love our homeschool.

And I am so honored to be a part of it!

Fantastic! You have really sold me on beefing up the amount of read-alouds we do here. I can really see now the many benefits of read-alouds vs just having your child read and then narrate a book. Truthfully, I think you just reminded me of something I already knew but had forgotten. Thank you SO MUCH for that reminder.

Oh, I so love those moments! Thanks for sharing these!

And thanks to all of you!