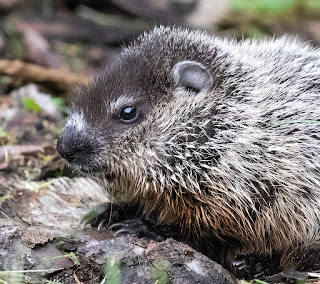 Groundhog Day, which was February 2nd, has been on my mind.

Punxsutawney Phil didn't see his shadow (not that I really trust a rodent to predict or plan my seasons for me, but an early spring is ever the stuff of dreams in the midwest, so thanks, little rodent.)

Bill Murray reprised his role as Phil Connor in a Super Bowl commercial (I never watch the Super Bowl, but I catch up on the commercials the next day), prompting a yen to rewatch one of my favorite movies.

And the movie always makes me think of this Shrinklit I wrote years ago. The last time I shared this poem on the blog, an awesome friend told me that only I could find a place for God in this movie. I love that she sees me as an original thinker, but the truth is, I simply stumbled onto ideas that others had been writing about since the movie's release in 1993. Harold Ramis's Groundhog Day ignited lots of pondering in lots of people, some serious, some fanciful. Here are a few examples:

So without further ado, here's my input, here's to trying to become a better person, and here's to an early springtime!

Phil: at first, a selfish jerk
Focused on his fun and work.
Women were a toy or game
Till every day became the same.

Quite suddenly, no rules apply
Steal some money, tell a lie.
Nihilism's worth a spin,
Then despair comes crashing in

Suicide just didn't take.
Surely something is at stake?
Could it be he'll find it's worth
Striving for a true rebirth?

Self-improvement: worth a try,
Though all past ways it does defy?
Selflessness for its own sake?
Turn away from all that's fake?

Something genuine and kind
Allows this man his best to find.
Is this conversion? God at work?
Or one colossal cosmic quirk?

Laura Purdie Salas has the Poetry Friday round-up today at Writing the World for Kids.
For more about Poetry Friday, go here.
Posted by Karen Edmisten at 8:03 AM

I love this Karen!!!! Can it be shared with you ad author or to you want to keep it u shared. I understand both ways!!! Hug!!!

I love that you titled it a 'shrinklit', Karen, apt! I always thought the movie was certainly a lesson, and your question will be answered in various ways, I think. It was a fun surprise on the Super Bowl.

Perfect! I like Phil's forecast better than any local groundhogs--we had a bright sunny day. it was glorious but fleeting.

This is awesome, Karen! I have seen Groundhog Day spoofed or referenced SO many times that I literally cannot remember whether I've ever seen the whole movie. But I think I'll just take your lovely extraction of its essence:>)

Laura, It's worth watching through, but I'm glad to provide the essence for you! :D
Kay, I'll take those sunny days as well. Hope you have lots more to come!
Linda, yes, I thought it was an unexpected and fun surprise, too, and Paula, yes, you may share, with credit, thanks.

Karen, what a delightful poem ... I loved that movie, back in the day ... have not seen it in years and in fact my 17 and 20 year olds never have (tho' it was a staple during the growing up of my earlier family). We've *just* been talking about getting it from the library for family movie night ...

Love it! Now I want to watch it again, too!

Penelope, you have to have movie night SOON! :)

This is great, Karen! I love the Shrinklit concept. :) At the library the other day, I overheard a very young child telling her mother that spring was coming earlier this year cause the groundhog didn't see it's shadow. She explained the whole thing to her mother quite charmingly.

Thank you! And, oh, I would have loved hearing that little girl. :) She sounds utterly delightful. :)

February
7    Laura at Writing the World for Kids
14  Linda B. at TeacherDance
21  Cheriee at Library Matters
28  Karen at Karen Edmisten*

March
6    Rebecca at Sloth Reads
13  Matt at Radio, Rhythm & Rhyme
20  Michelle at Michelle Kogan
27  Tabatha at The Opposite of Indifference

June
5   Margaret at Reflections on the Teche
12 Irene at Live Your Poem
19 Tricia at The Miss Rumphius Effect
26 Karen at Karen's Got a Blog!